the things we do to live a better life.

On Saturday I woke up bright and early (4:40am) to help my friends do a race in San Juan, Puerto Rico.  We met some great friends in our birth class when I was pregnant with Alma.  We have loved having such a wonderful group of friends who all have kids within a few months of each other.  One of the dads from this group does these races that are sort of hard to explain.  It is sort of like the show The Amazing Race.  Tyler has a team (go Nads!) that competes all over the country.  And they usually win.  It’s pretty cool.  I have started helping out with the races by doing clue solving with some others.  It is really fun, and really intense.  They get the clues and send them to someone, then we all get the clues and solve our assigned ones.  Then the racers on the ground have to run around, and complete challenges at each of the locations.  Makes perfect sense, right?

I have helped with races that were in New Orleans, Portland, and now San Juan (maybe Denver, too?).   Anyhow, on Saturday, the championship race was taking place in San Juan at 9am, which meant that I had to be up to help with clue solving by 5am.  No big deal, I’m up then anyway (thanks, Harriet).  My clues were super easy and I was confident with my answers.  This is a huge relief, because I would hate to send the racers to the wrong place.  In a heartbreaking turn, the racers didn’t make it to the final round, despite being very fast and generally awesome.

The final round was going to happen at about 10 am our time, and Tyler and I agreed to help with the clue solving for another couple teams.  Tyler and his family decided it would be more fun to all be together for a clue-solving-toddler-and-baby-wrangling party, so they braved the snow to come over to our house.  Tyler and I were on clue duty, while Jesse and Leia were on kid duty.

The clues for the final round were a lot more difficult than the ones from the preliminary race earlier in the day.  There was one clue that included an audio/picture file that had us totally flummoxed for awhile.  The teams we helped came in 4th and 5th, so it was a bit of a disappointment.  But still fun, and I think Tyler really enjoyed the beer he drank shortly after I took this photo of him in our clue solving room.

Jesse and Leia had a more successful kid wrangling time.  How could they not with these adorable babies and toddlers.  Leia and Tyler are just as awesome as we are (some would say crazy, others brave, I say awesome), and they have two kids under two just like us!  Max is a couple weeks younger than Alma and Desmond is about 5 weeks younger than Harriet. 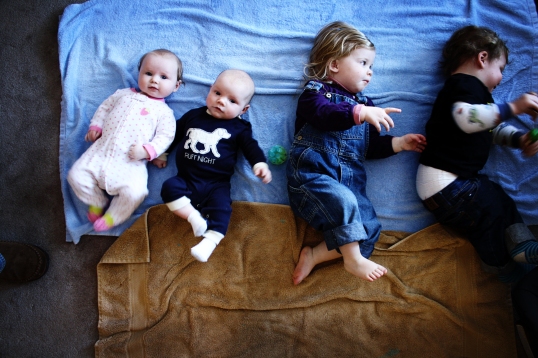 I love how the babies are being perfect models, while their big siblings are being typical almost-two-year-olds.

While the race results were sad, it was still a fun day of clue solving and hanging out with our awesome friends.

What do you think? Cancel reply